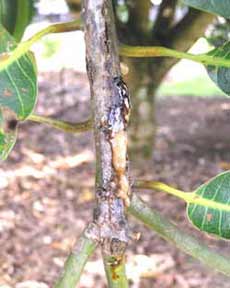 Mango (Mangifera indica L.) is one of the most economically important and a popular Asian fruits with delicious taste, excellent flavour, attractive fragrance, rich in vitamin-A and C. India is the world’s largest mango producer, growing nearly 1000 varieties and contributing over 50 per cent to the world’s total mango production of about 23 million metric tons. States of Uttar Pradesh and Andhra Pradesh are having the largest area under mango each with 25% of the total area followed by Bihar, Karnataka, Kerala and Tamil Nadu.

Mango crop suffers from a number of mango diseases at various stages of its development. Among the various mango diseases that attack mango crop, gummosis is of great economic importance since the trees die within a very short time. Gummosis, a condition of resin ooze from splits that develop on major limbs is one of the symptoms of sudden decline of mango. It has emerged as a new threat of extinction as mango trees are becoming victim at an alarming ratio especially in the orchards of India, Brazil, and Pakistan.

Decline disorders are recognized in virtually all mango-producing regions of the world. In most cases, the disease has been characterized by leaf drooping and drying; bark splitting, gum secretion from branches and main trunk, bud necrosis, dieback, vascular discoloration and death of the whole tree. The conducting tissues are damaged, blocking the food supply to roots and other parts, resulting in partial to full drying of the plant. As a preliminary symptom, drying of tip, discoloration and darkening of the bark from the tip becomes visible.

It progresses downward involving bigger branches. As a result, the leaves shed. Sometimes, gum oozes from the diseased portions. Bark splitting or cracking may also be noticed in severe cases. These symptoms are found alone or in combination with other symptoms in different mango orchards. On removal of the affected bark, a thick liquid with foul smell ooze out.

As the infection progresses, tree death occurs, perhaps 6 months from first appearance of symptoms. Initially, a portion of the bark is affected and gradually the whole tree trunk rots causing collapse of the tree. The wood is stained dark brown, spreading from a point of infection.

In India, the gummosis in mango trees was often accompanied by damage caused by trunk borers resembling Batocera reformaculata from February to October. The grubs cause severe damage by feeding on the bark inside the trunk, boring upward making tunnels, thus weakening and causing hindrance to the transport of water and nutrients from roots to shoots resulting in wilting and drying of the shoots.

Acting as a wounding agent and vector, the trunk borers probably assist in rapid spread of this disease in the orchard. Damage caused by a bark beetle (Cryphalus scabrecollis) was also reported to be associated with the disease. A close inspection of dried plants often reveals tiny holes, numerous small beetles running here and there under the bark, probably acting as carriers of this disease.

The mango diseases incidence is high during June, July and August and low during cool months from November to February. Perennial crops like mango are the most common hosts of devastating plant pathogens. Most of the neglected mango orchards predispose the trees to attack by different fungi, disseminating infection to nearby trees or neighbouring orchards. Once the disease establishes, it keeps on aggravating till the heavily infested trees are up rooted.

The fungus Lasiodiplodia theobromae responsible for mango decline is a common soil-borne saprophyte or wound parasite, distributed throughout the tropics and subtropics. The internal location and diversity of fungi that are involved in the mango decline syndrome reduce the opportunities for controlling this disorder with chemicals and fungicides. Regular monitoring and integrated pest and disease management techniques can help in controlling the spread of the mango decline. Some of the important steps necessary for its management are:

Jackfruit Plantation: How to cultivate jackfruit